Our cruise to the Holy Lands was one of contrasts: As we visited locations steeped in thousands of years of history, we were doing so from a new-generation, all-the-bells-and-whistles cruise ship, Royal Caribbean’s Odyssey of the Seas! 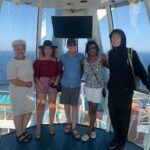 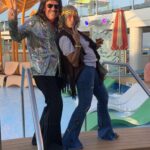 This gorgeous new ship boasts the largest indoor activity space at sea, called the SeaPlex®. Imagine an indoor basketball court that transforms into a bumper-car ring! Our group of 11 had such a fun time smashing into one another – the perfect ice-breaker if ever there were one! This indoor space also hosted adult dodge-ball and pickleball fun. 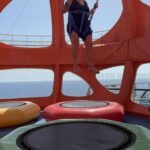 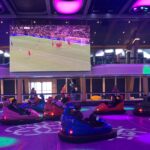 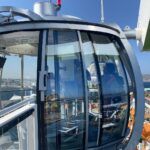 On our sea days and in the afternoons when we were back on board, our group tried pretty much everything the ship has to offer. For instance, three of us (the daredevils of the group?) had some high-flying fun at the skydiving simulator – definitely harder than it looks! The entire group minus one or two bounced around in the Sky Pad® bungee trampoline. This is basically a humongous replica of those suspended bouncy seats one puts his or her baby in to keep them occupied. We bounced and laughed and even got into a bit of trouble when one of our group attempted to do a flip!

One of the Californians in our group tried his hand at the FlowRider® surf simulator, while the rest of us cheered him on, and then a group of us tried the North Star®,  an observation capsule — and winner of the Guinness World Record for tallest viewing deck on a cruise ship — that elevates you 300 feet above sea level (and above the ship!) for unrivaled 360-degree views of the world as you wander.

While our group had no problem entertaining each other, it was also nice to have these amusing activities to bond us closer together as a group during our time at sea!