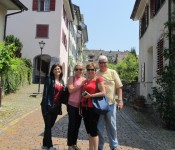 After cruising and coordinating on the big ships for years for Singes Travel International, I was curious about my latest assignment. Take 30 STI VIP’s on a Rhine River Cruise! I have always heard great things about river cruising in Europe, but I’ve always thought “How could a little boat that only holds 140 people compare to the Big Boys like the Oasis of the Seas that offer such a variety of restaurants, disco’s, theatres, pools, staterooms, shops, and on and on?” No competition, right? Well, I am here to tell you that our recent trip up the Rhine River on the Avalon Felicity was nothing less than spectacular! An amazing 7 days that took us from Zurich, Switzerland, to Strasbourg, France, through Germany and ending in Amsterdam, Holland. This was such a different experience, but yet has become one of my top 3 cruises of all time!

The Avalon Felicity has 4 decks, yes only 4 decks!! A humble, yet effective use of space that includes 3 decks of staterooms which offers either an nice size oceanview, or balcony cabin. The top deck is completely open (with a hot tub!), which comes in very handy, as being on a river affords you some incredible views of the countries we passed through. Especially the day we were entertained by the Cruise Director on a private tour of 28 castles throughout Germany, including the Katz Castle! I knew my family has been holding out on me all these years! J

Each day, there was a guided tour given by Avalon that is included in the price of the cruise. We each were given individual headsets so we would never miss the narration given by our guide. Because we are special singles, STI had there own headsets, and private bus that took us to Castles, Churches, Museums, Cable Cars, Monuments, etc. I have to say that the food was superb as well. With only 140 people, the service was excellent. Breakfast had an extensive variety. Lunch was delicious, as well as the dinners, which included complimentary wine. At night, instead of the Broadway shows on the bigger ships, everyone retired to the top deck. It was so beautiful to see the passing towns at night, and going under many bridges, and through locks, all under the light of the moon. We were very lucky to have had great weather. The nights were cool and the days were comfortable. On some nights, the crew put on their own shows in the lounge (very funny), and there was a singer/keyboard player every night. Of course, you cannot keep the STI spirit down. On a couple of nights, we rocked the house and danced the night away. On another night, we docked overnight in Mainz, Germany at 12 midnight, and as opposed to the big cruise lines, we were able to disembark and attend an authentic German Biergarten and mingle with the locals. When did you ever see that happen on Royal Caribbean?

The ports were especially spectacular! We started in Zurich, Switzerland, where we all stayed at the Mövenpick Hotel. The Mövenpick is not only a great hotel, but as we soon found out, it is a company that also manufacturers Ice Cream! We couldn’t understand why ice cream was ordered more than the food in the hotel restaurants? Now we knew, and it was excellent! During our pre-cruise, we took the trolly train into the main part of town to check out their restaurants, stores, and of course Gelato! The next day we were taken by bus from the hotel to the Felicity. We settled in, had a great dinner, and spent the night on the top deck meeting and getting know our fellow single’s, as well as our fellow passengers. It is very cozy on a smaller ship and you really get to know everyone. The next morning, we arrived in Strasbourg, France. We were treated to a guided city tour, and a stop at a vineyard in Alsace Wine Country for a special wine tasting. Over the following days, we visited many towns in Germany, including Speyer, Rudesheim, Mainz, Koblenz, Heidelberg, and Cologne. We even got to meet a real Prince and his family (and got a great group photo) and got a personal tour through the Sayn Castle.

And just when you thought, it couldn’t get any better, our last day was spent in Amsterdam, Holland. Those who have been there will understand the uniqueness of great city, with it’s Canals, Churches, Squares, Museums, and of course, its Red Light District! We took a great trip by private boat through the Canals, to get a good look at the house boats, and the streets of Amsterdam. That night we spent our last night together as a group, looking back at what a great time we had. We had a fabulous group, including many past cruisers, hence the term VIP’s, and some new STI peeps, all of whom had a blast. We couldn’t believe how fast the week went. But this after all, was no ordinary STI trip. We deemed this so special that STI provided an extra post-cruise day in Amsterdam. About 17 of us stayed, checking into the Krasnapolsky Hotel right in the heart of Dam Square, a busy, busy center of town next to the Royal Palace! We did some sightseeing during the day and then we all met at a very special location at 4pm, The Anne Frank House. The story of Anne Frank is an incredible one, so this was a very touching moment for all of us, and one we were looking forward too. STI had made special arrangements for us to go in at that 4pm time, as there was a usual 2 hour line waiting at the door. We had a special guide that took us into a room before entering the house, and gave us the timeline and the history that led to this story. The winding stairs, the bookcase that led into the “annex” and the actual diary’s were just amazing. That night we had dinner in Rembrandt Square, then took a tour of another area we were looking forward too, the Red-light District! This is a phenomenon, that can only exist within the streets of this city! What a way to end a great trip!

I highly recommend the STI Rhine River Cruise of 2014. If you’re looking for something totally different, amazing, exciting, and relaxing all in one trip, this is it. Need more convincing? Check out our Rhine River Cruise picture album on the STI Facebook Page. Enjoy!

Click below to reserve one of 2 Singles River Cruises in 2014.