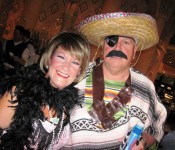 Have you traveled all over the world and aren’t sure if you’ll have fun on a singles vacation? Do you wonder if you’ll make friends or be all by yourself? Are you concerned that everyone will be too old or too young? That’s what I thought, but your worries are over…what are you waiting for?

My first trip with STI was Halloween in Las Vegas. I was a little hesitant about booking the trip, as I’ve been on so many “escorted” tours, where I ended up being everyone’s “mom” (group was my daughter’s age). Although I’m very young at heart (54 and my brain tells me 38, which is the last time I actually had a waist), I’m a professional who feels balance includes working hard and playing hard.

When I arrived at Caesar’s Palace in Las Vegas it was not my first time in Vegas. My expectations were high, as was my excitement. I arrived at the first gathering, which was a “meet and greet” and immediately felt welcomed by several people that I had sent messages to (yes, use the feature on the STI site), and was also introduced to everyone by the Tour Directors. Can’t say enough about the Tour Directors – seasoned travelers with outgoing personalities, who are there to help your trip be memorable! These people work so hard, get absolutely no sleep, are on call 24×7, are so organized, and happily listen to complaints (yes, this is the real world – you can’t make everyone happy).

From Caesar’s, we all walked across the street to Margaritaville, where we had a private party, complete with free drinks and awesome food! Everyone gathered on the outside patio, which overlooked the Vegas strip, while swapping travel stories and making plans for the weekend.

The first night was the Club Tour. We all met in the hotel lobby and took taxis over to the first club. As we came from all over the world, this was the first opportunity we had to get dressed up and mingle with the beautiful people. The different personalities, nationalities, and social cultures quickly dissolved within the first few minutes. Everyone was a little nervous with expectations. After a couple of drinks, we were all laughing, posing for pictures, and having a lot of fun. I won’t name names but all I can say is Texas, North Carolina, Ohio, and Canada really knows how to party! This was also my opportunity to wear that little dress that my daughter said looked crazy good, and the high heels that are only worn in Vegas!

We arrived at the second club and were greeted by our two Club Guides, which enabled us to enter every club with VIP status. No waiting in lines, VIP treatment, and we walked by all the people standing in line for hours. Although the drinks were ridiculously expensive (come on…7&7 and a glass of wine for $32), we quickly jumped onto the dance floor, complete with young girls dancing in cages. When we left the second bar, we had “party busses” waiting for us. These busses included open bar, stripper poles, strobe lights, and “boom boom” music. My friend from Canada probably still has bruises on her arms and legs from “dancing” for us. We loaded back into the party bus and went to Studio 54, where we danced all night long. I haven’t danced all night long in 30 years! Laughing and doing a combination of several eras (come on…we all dance the same as we did in elementary school – right?), dancing together, grinding body parts, and acting like we were all young again was great (looking at the pictures from that night quickly brings a smile to my face).

The second night was the Rat Pack Party and buffet at the Aria. We had VIP entrance into the buffet, a special area just for STI, and a selection of over 1000 items (including every nationality you can think of)! Naturally I went to the desserts first (if it’s going to end up on my hips –or somewhere else – I might as well enjoy it). The performers not only looked like Dean Martin, Frank Sinatra, Sammy Davis, Jr., Joey Bishop, and Marilyn Monroe – the sound was amazing. The show was not only entertaining but fun! After the show several of us went back to the hotel to have drinks at Caesar’s. That night we enjoyed several, several Jaegermeister shots, getting to know one another better, and talking about our costumes (amazingly I didn’t have a hangover or it could have been the four Bloody Mary’s immediately after waking up).

The last night was Halloween at the Fremont Street Experience. Seeing everyone dressed in costume was so much fun! We had the variety including several sexy nurses, flappers, queen of hearts, lady luck, pumpkins, pirates, and so many original and creative costumes. We all took taxis downtown to the VIP party. When we arrived at the venue, we were greeted by our Tour Directors and immediately provided wristbands for the private VIP party. This was a private area, in front of one of the performing stages, complete with open bar, and a beautifully catered dinner. Need I say more…open bar and free food! We were having so much fun that people were standing outside the area, asking if they could pay to join our party. The music was awesome, as we were directly below the stage, dancing and laughing all night. Because we had a private area, our Tour Director got on stage and announced the winners of our costume party. Congratulations to “cloudy with a change of showers”, Stu from the Hangover, Angie Dickenson, Maverick, and so many more.

Sunday breakfast was spent looking at pictures, exchanging emails and phone numbers, and planning our next trip together. It was very hard to say goodbye to new friends. Words cannot explain how much fun Halloween in Las Vegas was. Not only did I feel warmly welcomed, but honestly feel if you don’t go on a STI trip, you’re missing out on the most fun you’ll ever have on a vacation!