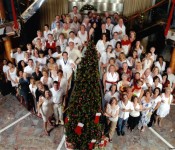 The Singles Travel International New Year’s Eve Singles Cruise of 2010, brought together about 100 single cruisers from 28 different states and 5 countries to welcome 2011. There were as many reasons why they were there as there were states represented, all with a common reason to bond, “YEAH, I AM SINGLE, SO WHAT!” Whether it was their choice or a choice made for them didn’t matter. They were there to CELEBRATE and that we did.

For some it was true culture shock as they were new to the single life and it was their first time traveling with a singles group. I could totally relate to how they felt. Only two years ago I took my first single travel adventure with STI; a weekend jazz concert in Chicago. I remember getting to the hotel, not knowing a soul and wondering what the heck I had signed up for. I’m in a strange town, feel like I have “ALONE” tattooed on my forehead and I’m stuck here! I never did see any jazz that weekend. I was too busy running around with people I had met, touring Wrigley stadium, taking the architecture tours, bike riding….What a great and appropriate time to embrace whatever life had thrown at me and throw it right back! I have a friend that lives in Miami that I met on this trip and now we do our own travel and social thing together.

This was a common theme I learned from people on the cruise. There were many examples of friends that had met on previous trips and had been traveling together with the travel group for years. They were the seasoned singles in the group, quite content with the freedom of single life and the camaraderie of the travel group. In both instances, they had “been there, done that” and were often the heart and soul of the party.

The benefits of traveling with a singles travel group is the loose structure that allows you to be as involved or not involved as you want to be. It’s a mix of introverts and extroverts that drive each other crazy, but it works. You can participate in the planned activities, usually always includes a happy hour, or create your own. The “Lock and Key” icebreaker on the New Year’s Eve cruise provided a great opportunity to put names to faces as the men attempted to have the right key for the ladies’ lock. While there were prizes for those with the most matches, the real gift was listening to the suggestions flitting about the room about what could happen “if your key opens my lock………, oh baby!

As I got to know the other travelers and heard their stories about why they were there…….

…it was awesome to see them leave it all behind, to become more comfortable in their own skin and to just be in the moment. Making new friends, or maybe a new love connection, it didn’t matter; the New Year brought new hope for a new life.

A cruise as described on STI’s website is a chance to “..do as you please, celebrate special occasions, see the world and make new friends. As for the cruise of NYE 2010, I say Mission Accomplished.

If you were there, what do you think??