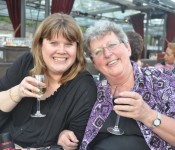 The first question I hear when I tell people what I do is “Do singles meet on your trips?” In 18 years of service, there are many that have fallen on cupid’s arrow while aboard one of our cruises or tours. But love is not the only bond that is formed on a singles vacation and it’s these stories of friendship and fellowship that excite us more than anything here at STI.

So, here’s where the idea for this week’s blog started. Yesterday I made some calls to see if cruisers from last year’s 4th of July cruise were ready to do it again this year and in just 1.5 hours, I made 33 calls, spoke to 12 members heard 3 great stories.

The one that made my day was that 2 of the cruisers that met last year were still dating even thought they live in separate states! This year, they are headed to the Cayman Islands to celebrate their Independence Day “anniversary”. Best of luck to you both.

On another call, I spoke to a man who was very enthusiastic about our vacations and looking forward to the next. He had just met for dinner with another member that recently moved into his area. They met on last year’s cruise and kept in touch.

Two of the guys from the cruise on the 4th of July are going with us on the Epic in the Mediterranean in 2 weeks; so I just called to say have fun. What I found out is that they were both already in Europe, one in Germany, one in Madrid and would meet up next week to travel a bit before joining our group in Barcelona.

Our community of nearly 18,000 members has so many stories, we will never know everything that’s happening, but when we do, you can bet that it brightens our day.

If you have a story about connections that you have made while on vacation with Singles Travel International, send them our way!