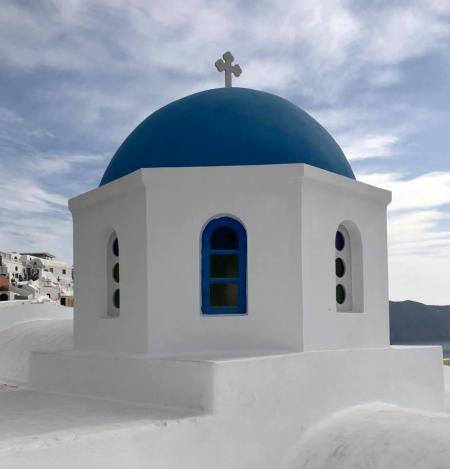 Greek Island Fantasy – May 13- 21, 2019  PLUS Extend your stay with a week at a singles-only resort on the Isle of Crete

Isle of Crete Rendezvous – Six departures to choose from. All with your own room- no extra charge.

Known as the land of mythical Gods and ancient civilization;  Greece and its surrounding islands are generally at the top of many bucket lists.  The myths came to life for the members of Singles Travel International with seven days on Celestyal Crystal, and included all the hot destinations in Greece, but more importantly, the time to explore.  From the antiquities of Athens to the turquoise waters and amazing sunsets of the islands, our recent adventures were anything but mythical.

Athens is the first step of our Greek journey and no visit is complete without the trek to one of the most iconic hills, Acropolis.  At just over 500 feet high, atop the summit, sits the Parthenon, one of the most famous buildings in the world.  This viewpoint gives the opportunity to see view down on the other monuments, as well as a view of modern Athens.

From the central location of Syntagma Square, our first stop on the Hop On Hop Off bus affords the group the ability to take on the rest of the city’s amazing sites.

For those guests that came in for the STI pre-cruise stay in Athens, our day of embarkation offered a side trip to Corinth for a cruise on the canal and an authentic Greek lunch before heading to the Port of Piraeus to embark on our upcoming journey. Athens is the perfect jumping off point for your island hop. It sets the stage for all the beauty and history that is to come.

For those that are unfamiliar with our ship, the Celestyal Crystal, once onboard you feel the charm and comfort of a smaller ship.  That accompanied with the included drink package, onboard gratuities and even 3 shore excursion; lends to a great vacation.

Our adventure began as we set sail that evening for our first port of call, Mykonos.  We arrived at this charming island the following morning.  Walking into the village of Chora, it looked just like a postcard.  Every glance, at every turn, I was overwhelmed by the picturesque images of this quaint island.  We made our way along the perimeter of the island, passing through Little Venice, with walkways edging right to the clear blue of the water. We wandered on until we came upon the iconic backdrop of the windmills. Although there are many peppered throughout the island, the five standing in a row  have overlooked the sea since the 16th century.  For those that wanted a bit more history, they made their way via a short boat ride to Delos, to delve into the history dating back to 3000 B.C. 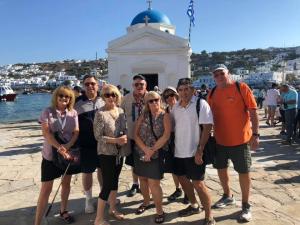 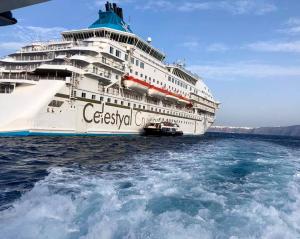 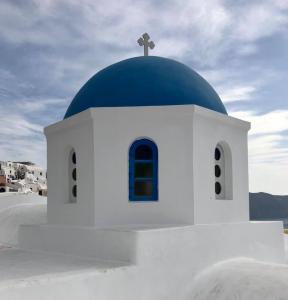 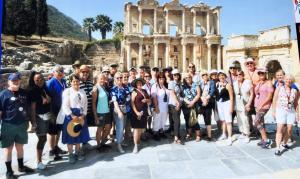 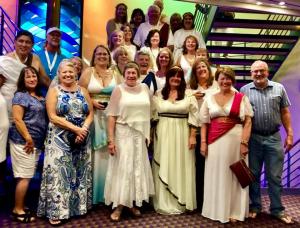 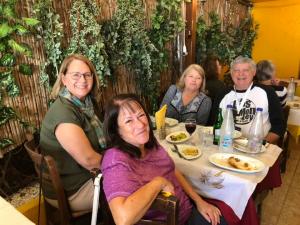 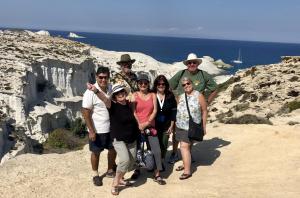 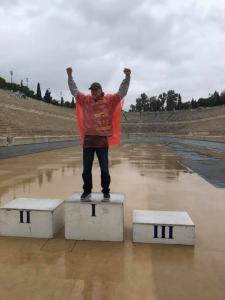 Our overnight in port granted us the opportunity to see this amazing place at night.  After dinner, several ventured back from the ship to enjoy some more shopping, or even a few drinks along the waterfront. It’s so rare that a cruise ship allows for overnights in a port. This unique feature really enhances the vacation.

Our departure from Mykonos was the following morning had us on our way to our next port of call, Milos.  We arrived midday, and tendered into this quiet little island, known for the discovery of the statue of Venus de Milo.  For those that were not on a scheduled excursion, we made our way out to Sarakiniko Beach.  Once at the top of the hill, it felt as though we were walking on the moon!  These incredible whitewashed formations were a result of volcanic activity thousands of years ago and the crashing waves impressing upon the rock.  A further walk down uncovered an amazing white sandy beach in the cove.

We set sail later that evening from Milos on our way to the well-known destination of Santorini.

A highlight of this itinerary is that we were able to spend 2 full days on this beautiful island.

cal·de·ra; /kalˈderə,kôlˈderə,kalˈdirə/noun/ a large volcanic crater, typically one formed by a major eruption leading to the collapse of the mouth of the volcano.

Santorini… it invokes visions of whitewashed buildings cascading down the cliffside, incredible sunsets and stunning panoramas over the caldera. Yes, it was just that!  Upon approaching the crescent shaped island on the tender, the realization of three ways to reach Fira sank in.

Yeah – I took the cable car!

Needless to say, the hype is real! The first day, we were on our own to make our own discoveries, shop and yes…eat!  The following day, we were tendered to the newer port where we boarded the buses that were awaiting to take us to Megalachori and on to Oia that boasts the best location to view the sunsets.  After the tour, we still had then entire afternoon and evening on our own. Could this be the island that Plato considered Atlantis?  It definitely adds a little mystery to a lot of charm!

After leaving Santorini in our wake, we journeyed on to Crete.  Our inclusive excursion transported us to the ancient ruins of the Minoan Palace of Knossos.  These majestic ruins contrasted against the surrounding hills.  It is remarkable to capture a glimpse of what life was like thousands of years ago.

Staying on track with our time travel, from Kusadasi, Turkey, we made our way to the ancient ruins of Ephesus.  To walk through the streets and marvel at the wonders that passed through thousands of years  – it’s hard to put into words.  As we departed early evening, we made our way back to where our journey began in Athens.

Another check off my bucket list, but this destination holds its place on my “ I want to go back!” list.  Greece far exceeded my expectations as a travel destination.  What are you waiting for?

Isle of Crete Rendezvous – Six departures to choose from. All with your own room- no extra charge.