French Canada: A Paradise for the Bon Vivant 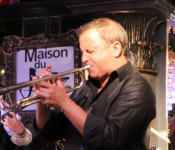 When asked about our vacationing bucket lists, it is certain that all of us will reference at least one country from the eastern hemisphere. Perhaps it is the aroma of warm pastries, luring our noses into the homey quarters of a family-owned bakery. Or, maybe it is charm associated with the street artists who proudly show off their latest masterpieces. Whatever the reason, such destinations have, and always will, serve as a bona-fide “escape from the real world.” However, such a trip can be time-consuming and costly. Although no location can trump the experience of meandering down European cobblestone streets with a steaming cup of caffe latte in hand, an ideal alternative awaits us right in our own backyard: French Canada. Our singles only group was pleasantly surprised by what our hospitable neighbor to the north had to offer us during our four-day long Memorial Day holiday adventure.

Our escape from the real world commenced in the world’s second-largest predominantly French-speaking city in the world—Montréal. As with all metropolises, Montréalwas a bustling blend of multi-lingual culture, best traversed by the Métro de Montréal. (A three-day pass, which also included bus use, proved to be most economical, costing a mere $18 CAD.) From museums to theatrical productions, there was something to suit everyone’s entertainment taste buds. One notable venue, The House of Jazz, offered an extensive fusion menu that well-accompanied the live nightly performances. For a single cover charge of $10 CAD, we spent an entire evening enveloped by the upbeat tunes of the Taurey Butler Jazz Trio and the sultry sounds of Carolyn Fe and her Blues Collective.

After two days of living the city life, we drifted out into the picturesque countryside of the province via passenger train. The lulling three-hour long ride encouraged us to recoup some rest before embarking upon the strenuous guided foot-tour that awaited us in Québec City.

Upon arrival at the Gare du Palais Station, Québec City immediately exuded its Old World charm. A photojournalist´s haven, this provincial capital, still surrounded by its original fortifications, was a living page out of a French history book. Military and religious relics abounded throughout the traditional neighborhoods. Haut couture boutiques flanked chocolatiers and local artisan shops on the Rue du Petit-Champlain. Copious people-watching opportunities were made possible, thanks to the multitude of plazas and parks sprinkled in-between the gourmet dining districts. With the aid of the helpful Québécois and user-friendly maps, it was extremely pleasant and safe to wander the city sans a guide.

Time seemed to stand still for four days as we enjoyed the moments gifted to us in such a captivating European-like ambience. But, before we knew it, our weekend love affair with the romantic French side of Canada was over. With enlightened minds and enchanted souls, we reluctantly bid Au revoir to our “escape from the real world—“ until next time!