Sometimes a smaller ship has a distinct advantage, as proven by the unique Cuban itinerary of the Celestyal Crystal with the most ports of call.   Why just see Havana when you can also ease into the smaller harbors of the old Cuban capital of Santiago, the quaint city of Cienfuegos and the original harbor of Montego Bay, Jamaica?  We have all heard of Guantanamo Bay but wait until you experience the vastness of this area as you sail by at night and see the lights of Guantanamo Bay for about an hour! 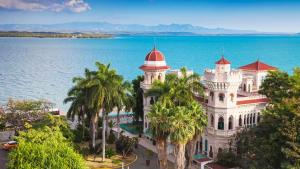 Santiago de Cuba, capital of the island’s “Wild East”, is the cultural nerve center for the evolution of Cuban architecture, literature and music. Loma de San Juan is the site of the cavalry charge of Teddy Roosevelt’s Rough Riders in 1898 during the Spanish-American war.  Visit the former Moncada Barracks and Revolution Square, marvel at the UNESCO El Morro Castle both on land and from your ship, and enjoy an Afro-Cuban traditional dance performance.  Time permitting, tour the Santa Ifgenia Cemetery where such notable figures as Jose Marti, Emilio Bacardi and now Fidel Castro are laying at rest.

After spending two days immersed in the dilapidated splendor, nostalgia and neglect that is Havana, cruise into the “Pearl of the South”, a 19th century planned city and a UNESCO heritage site. Cienfuegos is within walking distance of the pier with an eclectic style.  Experience various art collections and an Afro-Cuban performance at the Graphic Society and Project Trazos Libres. View the magnificent Teatro Thomas Terry and Palacio deValle before having free time to roam the street markets. 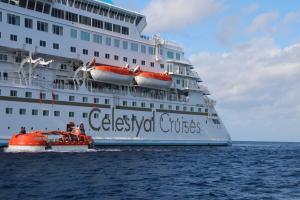 So, what are you waiting for??  Come discover the authentic Cuba and capture its nostalgic beauty before untouched but crumbling mansions are restored.  Electricity, running water, comfortable/clean mattresses, toilet seats and toilet paper, internet, TV and credit card usage are rare on the island but not on your home away from home.  Enjoy the creature comforts of the Celestyal Crystal while circumnavigating Cuba with Singles Travel International. 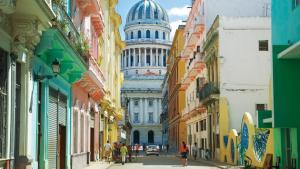