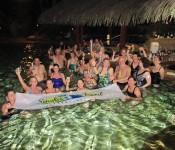 Costa Rica for singles.  When uttered, these words beckon images of lush rainforests laden with unusual animals likened to those seen in National Geographic photo shoots.  This awe-inspiring bionetwork is, however, much more than an exotic escape from the “real world.”  It is the backbone of an eco-minded way of life.  Although civilization has crept in, it reveres its natural surroundings and chooses to maintain a symbiotic relationship with them. As a result, the ambience throughout the country is, as the local ticos would say, pura vida.  And our group was fortunate to savor a trozito of that good life during its week-long Costa Rica Multi-Sport adventure.

We began our trek through virgin lands at the Espíritu Santo Coffee Plantation.  Situated in the mountains of Naranjo, it truly was a scene out of a travel magazine.  Enveloped by the serenity of over 600 acres of Arabica coffee fields, the travelers became knowledgeable about the process used to produce a cup of unaltered java, from hand-selected seed to sun-roasted bean.  The humbling journey lasted approximately two hours and instilled a sense of appreciation of sustainable farming in the participants. With the aroma of fresh coffee lingering in our noses, we made certain to peruse the offerings of the on-site gift store, so as to be able to bring a bag of pura vida home to brew.

After meandering through a hacienda for the majority of the day, easing into the evening was quite simple once the hikers were received at the Tabacón Grand Spa Thermal Resort, with refreshing tropical mixers.  Then, several hot-spring fed pools and waterfalls, nestled amongst wild orchids, bromeliads, and palms, awaited their aching arches.  The plush robes and slippers provided in their chic quarters thereafter added the perfect, comforting touch.  Some of the guests took their relaxation to the next level and opted to capitalize upon the lavish list of spa options that the resort offered; much to their surprise, the services were administered in open-air cabanas surrounded by candle-lit paths that wound through the foot hills of El Volcán Arenal.

As much as the travelers enjoyed their leisure time, they equally hungered for some adventure.  From the Central Valley region to the province of Guanacaste, active outdoor endeavors abounded.  We zip-lined and hiked our way through the vegetation near Lake Arenal.  We trotted like sabaneros down dusty trails through the wetlands of Hacienda El Viejo.  We kayaked through the pristine, brackish waters of an estuary between Tamarindo Beach and Playa Grande.  We even braved the rapids of Río Tenorio.  All the while, crocodiles, howler monkeys, iguanas, macaws, pizotes cautiously eyed us as they allowed us to pass through their cherished territory.

Just as quickly as we became enamored with the perfectly balanced harmony of man and environment, the time came to part ways with our newly beloved Costa Rica.  It was then that we understood why the country houses so many international expatriates. When all aspects of life are esteemed an

d celebrated in accord with the natural world, on even the smallest of scales, everything truly is  pura vida.