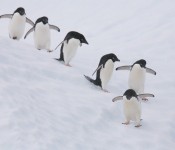 Is Antarcitca for solo cruisers? We think so, especially if you want to expand your horizons and do something different that very few people ever have a chance to do. But it’s not for everyone and we’ve listed some tips as well as Dos and Don’ts from excerpts of an article from Cruise Critic. There are choices to be made and it really boils down to your personality, sense of adventure and physical ability.

Singles Travel International will embark on a cruise to Antarctica in January, 2013 and we’ve done our homework. In addition, STI guarantees to find you a roommate match, which shaves thousands off of your vacation.

-Excerpts from an article by Lynn Seldon for Cruise Critic

Antarctica– a k a “The White Continent” — may very well be the last frontier for cruise travelers.

Don’t get us wrong — it’s a big destination, but we mean that in the most literal sense, with hundreds of thousands of penguins and icebergs that dwarf even the largest of mega-ships. Still, fewer than 20,000 cruise passengers make it ontoAntarcticaannually, and it’s often a once-in-a-lifetime notch in a cruiser’s belt.

Quite simply, Antarctica is unlike any other cruise destination in the world, and choosing and planning anAntarcticacruise is also unlike anything else a cruise traveler — veteran or novice — will face. The reasons for this include the distance to the port of embarkation (typically more than 12 hours of flying time), possibly harsh weather conditions at sea and on land, and non-traditional ports of call — you won’t find duty-free shopping centers on Antarctica.

More so than any other cruise destination, choosing the right line, ship and itinerary is the key to an enjoyable Antarctica experience. The style and size of the line and ship (from casual to relatively formal and from very soft adventure to hardcore) will greatly influence a cruiser’s experience inAntarctica. For example, mainstream cruisers looking to try something new might find the comprehensive experience onboard Hurtigruten’s ships an easy transition, whereas Antarctica veterans or adventurers looking for total immersion might choose to swim in a thermally heated spring or hike on South Georgia with Intrav’s Clipper Adventurer.

Here are a couple of key facts to know about visiting Antarctica:

Located in the Southern Hemisphere (and how! It’s just about as far south as you can go), Antarctica’s summer occurs during our winter. On theAntarctic Peninsula(where a large majority of ships go), temperatures generally range from 23 to 41 degrees Fahrenheit in summer and from -25 to 5 in winter. The annual cruise season runs from December until February; it generally stays light until midnight or later in summer, and visitors can expect about 20 hours of daylight a day.

As for key places to visit, Antarctica isn’t like the Caribbean, where itineraries are generally followed to the minute (when they say “All aboard” in Grand Cayman, they really mean it). In Antarctica, weather conditions often dictate whether a scheduled stop is made or bypassed for somewhere with better landing conditions. However, some possible destinations to look for in itineraries include the Antarctic Peninsula in general; HopeBay, a popular and typically calmer destination for lots of ships; Lemaire Channel (beautiful cruising); ElephantIsland; DeceptionIsland; and CoronationIsland. A bit further afield, but no less dramatic, longer cruises might include South Georgia, the South Shetland Islands and the Falkland Islands (which are both well worth the additional days at sea).

As for packing, the specific line you choose will provide advice, but some essentials include: a variety of casual clothes that you can layer (some ships do have more “formal” evenings, but Antarctica cruising is generally casual); fully waterproof rubber boots (Wal-Mart actually sells a good pair and we saw many passengers wearing them); a waterproof rain jacket; waterproof pants (worn over other pants or long underwear and needed for almost every landing); one or two sets of thermal underwear; two pairs of gloves (they will get wet); one or two pairs of sturdy sunglasses (the sun reflecting off the ice is incredibly bright — and warming!); a camera (we recommend digital so running out of film isn’t an issue) and lots of batteries; a set of mini-binoculars (carry them with you at all times); a waterproof backpack; plastic bags for added protection; sun block; and a bathing suit (for that hot tub!). Most — if not all — ships do provide a take-home parka to each passenger, so leave that heavy mink coat or huge North Face parka at home.

Here are some dos and don’ts:

Don’t be shocked by prices. Compared to most destinations, Antarctica cruises are quite expensive to run and often include many more things than typical cruises — like charter flights, pre-cruise overnights, and shore excursions. Expect to see pricing in the $250 – $500 (and more!) per person per day range — and that’s for the older, less amenity-laden ships.

Do consider a pre- or post-cruise stay inSantiago orBuenos Aires(one or two nights are often included in the package, and we wish we’d stayed in BA longer).

Do pay close attention to the packing list provided by your line, and the hints provided above. There aren’t any outdoor adventure gear stores on Antarctica.

Do take along one or more pairs of binoculars — Antarctica combines the dramatic landscapes ofAlaskawith the wildlife of the Galapagos, from towering mountains and glaciers to thousands of unique animals including — of course — lots of marching penguins!

Don’t expect the itinerary to run like clockwork: Weather can change everything (they don’t call Drake’s Passage “Drake’s Shakes” for nothing!). We actually had to skip two landings during our cruise because the crew couldn’t safely get the landing crafts into the water, much less the passengers into the landing crafts. Our hands-on captain simply explained the situation and we continued sailing. The first missed landing actually led to more time on the Antarctic Peninsula proper, and every minute there turned out to be precious.

Don’t fret if your itinerary fails to include rounding Cape Horn– many passengers find it quite anticlimactic, in that you don’t really get very close and the weather out on the deck can sometimes be quite daunting.

Do consider itineraries that feature more than a quick trip to the continent. South Georgia and the Falkland Islands are actually almost as interesting as Antarcticaproper. The wildlife found in both destinations makes it worth several days at sea, and cruisers who crave a bit of history and civilization will find the small populations living on the edge quite interesting.

Do mull over ship size quite closely. Smaller ships generally have more frequent landings on the continent. On the other hand, larger ships typically handle high seas better than small ones (but any ships venturing to Antarctica are built to withstand sometimes punishing conditions — this is not the Caribbean or evenAlaska).

Do think twice about bringing the family. Antarctica cruises simply aren’t targeted to parents or grandparents traveling with kids. Great news for singles.

We would not recommend a line or ship that simply sails near the Antarcticacoast, but never allows land exploration. That would be like looking at a menu, but never getting to order a meal. Why go that far and not march with the penguins?

There may be a few disappointments: long lines for tenders (something smaller ships don’t have) and the limited amount of time we had on land (driven by the number of passengers, but also by ecological concerns and regulations). That being said, we would discourage anyone from going to Antarctica who expects a “typical” cruise experience — stick to the other six continents if you’re looking for bustling casinos, shopping ’til you drop, or typical shore excursions.

Why: This popular Scandinavian line offers great value for your dollar.

Who Will Like It? Veteran cruisers that aren’t comfortable committing to one of the smaller ships and but are looking for a new destination experience.

Join fellow members from STI aboard the MS Fram in January, 2013: https://www.singlestravelintl.com/trip_packages/139-antarctic-blast-for-singles