Alaska with a Twist…and a Turn 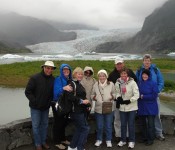 This is Michael, your traveling STI Concierge, and I just got back from our singles cruise in Alaska aboard Royal Caribbean’s Rhapsody of the Seas. We had 40 STI Cruisers with us, most of whom were first timers! There’s nothing more exciting than escorting first time STI Cruisers to a new destination that I know is going to knock their socks off, and Alaska did not disappoint!

Our journey started in Seattle, Washington. STI booked us in a very classy hotel called the Fairmont. During the day, we toured around town stopping at the Downtown Market where we sampled shrimp (my favorite) as big as my hand! Deeeeeelicious! Seafood is the star attraction here, and it was hard to choose what to eat first for lunch! Our Pre-Cruise Party started at the Hotel Bar, with a complimentary drink and an appitizer thanks to STI! Then it was off to PF Changs for dinner. The party was just getting started and after dinner, we took the Seattle Monorail to the Space Needle. The elevator ride up to the top was exilerating, and the views at night were spectacular. We ended the night there exhausted from the days travels, and anticipating our cruise to Alaska!

The next morning, our group was treated to a morning tour of Seattle aboard a beautiful bus complete with our expert guide Duse Mclean. With a name like that, we knew this was going to be a good tour! Afterwards, they dropped us off at the dock to board the ship. Check in was a breeze. At our Welcome Aboard meeting, we all met, mostly new, some past cruisers, all anxious to start this great adventure! Soon, we were on our way, cruising in smooth waters through the Inner Passage, on our way to Alaska! We celebrated with a Welcome Aboard Party with a complimentary cocktail from STI. It was a great way to get acquainted. We then went to dinner, which was excellent, and ended the night with dancing in the Disco.

The next day was a sea day, but this was no ordinary sea day. It started with STI BREAKFAST CLUB in the main dining room, followed by our first STI DANCE ACADEMY lesson! Little did I know, that 30 out of 40 cruisers would show up, on a sea day, no less! Not only were they enthusiastic, but they picked up my CUPIDS SHUFFLE routine in no time, and had a fun time doing it! I knew that we would have to do something special here, so after the class, I went to our Group Coordinator and asked if we could do a FLASH MOB performance for the ship? She said she would talk to the Cruise Coordinator, and let me know. I met the group back in the Solarium for a Pool Party, and then on to TV Theme Trivia contest, all the while, keeping my idea to myself at this time. That night we enjoyed Formal Night at the Captains Party. Our group was looking pretty sharp! After dinner, we did Karaoke, and then it was off to the dance floor….Whew! Another full day!

Our first port was Juneau. We were magically transformed to another land! I can describe it, but you really have to be there!The Mountains, the Mist, the Wildlife, the Blue Ice, it’s like nothing you’ve ever seen before. Most of us were going on excursions, from Helicopter and Dog Sled Tours, to Zip Lining, to Whale Watching, to seeing the Mendenhall Glacier. It was a full day of exploring new and exciting places! Afterwards, we all met at the RED DOG SALOON, a “must see” in Juneau, to compare notes and trade stories! Once back onboard, we took a deep breathe and prepared for our 70’s GOLD DIGGER PARTY! We partied in the Centrum, entertaining everyone on the ship, we partied in the dining room, and then back to the Centrum, where, by coincidence (NOT!) it was 70”S NIGHT ON THE SHIP! So, we partied with the 70’s ship entertainers! Whoooo Hooooo! I think they were taken aback a little, and everyone on the ship thought we worked for Royal Caribbean!!!! (Check out our pictures) It just doesn’t get better than this! Oh wait….it does…..….I didn’t tell anyone, but I had gotten word today that tomorrow, we had permission to perform our FLASH MOB in the CENTRUM at 7:45pm!

Day 4 brought us to the town of SKAGWAY. I broke the news to our dance troupe at breakfast. They were excited. We had a final rehearsal in the morning before departing the ship. It was another day of exciting excursions. The featured excursion was a trip on the WHITE PASS SCENIC RAILROAD. A replica of the old style railroad that brought prospective seekers of gold to their prospective locations. It started in the downtown area, and climbed up around the mountains. The views were spectacular. Our tour guide secured a great spot for us in the last car of the train. 10 of us stood outside the back car, and the sights were amazing! When we got to the top, we were escorted by bus tour through the Yukon, and then back down to town. We had lunch at the RED ONION BAR (kinda like the RED DOG SALOON but in Skagway:) Back on the ship at the end of the day, we prepared for another theme night: ALASKAN “ICED COLD/WHITE HOT” PARTY! Everyone showed up at our STI HAPPY HOUR wearing white. Our FLASH MOB performance time was fast approaching, and the sound tech signaled me to gather my dance team. My “Flash Mob” team casually started strolling around the CENTRUM in their white outfits, starting to draw attention from people sitting at the bar, tables, and from others looking down from other decks, as people wondered “What the heck is going on here?” Suddenly, the music started and we sprang into formation on the dance floor to everyones surprise. For the next 5 minutes we performed our routine, and at the end, we got a standing ovation from 5 decks! Bravo STI DANCE ACADEMY! We had a blast, and continued our party into the Disco and into the night!

The next morning from 5-11am, our ship cruised by the Tracy Arm Fjord Glacier. Considering how late we were up last night, we got a good turn out for this rare event. We had a park ranger narrating on the PA system, as we went through the various spots that provided the best view to see blue ice! We all got some great pictures, and drank hot chocolate. A lot of our cruisers were surprised that this time of year brings a somewhat comfortable temperature of about 60 degrees. Not bad for an Alaskan summer! We had a great lunch in the dining room, and in the afternoon, we relaxed at our HOT TUB party on the pool deck. Later, we had another dance class. This time we focused on Latin Dancing, Merengue to be exact. Then it was back the Schooner Bar for STI Happy Hour, a great dinner, and then it was off to the Viking Crowne Lounge for the most popular game ever to held on a cruise ship: THE QUEST! Quest is a game where the audience is divided into teams. The cruise director calls on the teams to bring up certain items such as a belt, or shoe laces, or a cruise compass, or “other items.” He also asks people to perform crazy dances or do “other things.” I think you get the idea. We had most of our group there so we were divided into 2 teams. Needless to say, it was a great time, especially for those who had never participated before. It was all in good fun, even if if our 2 teams did not win!

DAY 6 was our final day at sea. Everyone slept in late. Surprise, Surprise! STI Lunch (late Breakfast) was in the WINDJAMMER CAFÉ. A fabulous buffet was served, and enjoyed by all. Alas, we were headed back to Seattle, and spent most of the day cruising again through the Inner Passage. You could see that the cool mist we had encountered for the past 6 days, was slowly fading, and the temperature was slowly warming, as we saw more of the sun! In the afternoon, we had our Final Dance Class, and at 4pm, we held our STI T SHIRT CONTEST in the Solarium. We had a great response with a lot of creative designs! It was tough to pick a winner, but by audience applause, Holly was chosen as our grand prize winner, and proud owner of a brand new STI CARRY ON BAG!!!! She did a great job covering the front and back of her STI T Shirt. You check it out in our STI ALASKAN CRUISE photo album on our STI FB page along with all the other great shots from our trip. That night after dinner, we participated in the ships 50, & 60’s Rock N’ Roll Dance Party in the Centrum. Our STI DANCE ACADEMY, now being “professional” dancers rocked the night away!!

Our final Port Day was spent in the Canadian City of Victoria. This beautiful sea town is filled with Botanical Gardens, Historical Buildings, Great Food, and lots and lots of shopping! Some of us went on a Garden Tour, while others went on an Orca Whale Finding Tour, while still others were just happy to take a walk into downtown, or take the Hop-On Hop-Off Bus Tour. It was a very relaxing day. The weather was perfect, and it was a great compliment to our Alaska trip. Back on the boat, we held our final party of the cruise, THE CABIN CRAWL. Judy was kind enough to let us use her Balcony Cabin to gather the group for refreshments, watching pictures from the cruise, trading stories, and generally laughing a lot! I think we were already planning our reunion cruise! Good sign!

Alaska is truly a wondrous, adventurous, and exciting place to visit. I never get tired of going there, and I love seeing the positive reactions to peoples first visit. If you’ve never been there, I highly recommend that you check out our next Alaskan Cruise in August of 2013. I can’t wait to go back, and I hope you get a chance to experience Alaska with STI!